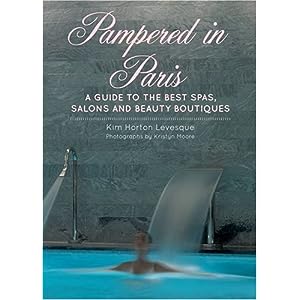 If there were ever a list of the world’s most covetous occupations, you can bet that Kim Horton Levesque and her painstaking traipse through Paris’s most luxurious high-end spas would be an honorable mention. In her new guide, “Pampered in Paris: A Guide to the Best Spas, Salons and Beauty Boutiques” (The Little Bookroom, New York), Levesque has searched each arrondissement to find and experience the most distinctive spas and salons, and manicure, perfume and makeup boutiques. From the splendor of the palace hotels to more intimate centers of well-being, Levesque details the best of the best, and Spa Week Daily will be exclusively featuring some of our favorite excerpts.

Sit back and indulge vicariously in a little spa haute couture; here’s an excerpt from Institut Dior in the Hôtel Plaza Athénée:

Walking into the Institut Dior is like sitting front row at an haute couture show in Paris: as they wind around the staircase that leads into the spa, guests are entranced by a giant video screen projecting a Christian Dior runway show. Here, Dior has created spa haute couture.

The Hôtel Plaza Athénée has enjoyed a long relationship with Christian Dior. He moved his studio to the avenue Montaigne in 1946, just up the street from the Plaza. The hotel became a source of inspiration for him; he named several designs after it—the Plaza and the Athénée suits. It became the place where Dior entertained and dined with the world’s fashionable and famous; it also became a refuge where he could steal away into a private lounge for a moment alone.

Today, the institut glows in radiant white. Once a guest is inside the spa, his or her eye is drawn to an impressive water-filled basin with a scrolled mosaic design, above which a glass droplet is suspended. The service is impeccable; within seconds, a hostess appears to offer a plate of fresh fruit and water, tea, or other drink. Lounge chairs are long, white, and luxurious. Photos of Dior models in front of the Plaza, along with sketches of Dior’s designs, decorate the hallway that leads to the treatment rooms.

The spacious treatment rooms are crisp white with soft, gray accents; the silver and white CD monogram is emblazoned on the walls. A gray, tiered ceiling dotted with tiny lights floats over the stunning VIP room, where the esthetician consults with the client over an elegant marble table. The Institut Dior philosophy centers on reactivating youthfulness; the Dior Salon has an exclusive, high-tech micro-abrasion technique for the body and face that uses exfoliation, photo-stimulation and lymph-draining to revitalize the skin. A hammam and sauna are available to use pre- and posttreatment.

Guests receive a petite remise, a makeup reapplication from an esthetician, as part of their service. The institut offers manicures, pedicures, massage, specialized facials, and targeted body treatments, and includes services especially for men. Three- to five-day programs are available, as are two-week series of anti-aging and regenerating therapies. A ninety-minute bust and décolleté firmness treatment, as well as the Contre-Attaque

Cellulite, which targets the area from the waist to the thighs, are both part of the Youthfulness body series (240€ each). Near the entrance to the hotel, an elegant lounge and café surrounds the building’s light- and foliage-filled interior courtyard. It resonates with the calming sound of a harp player and has a few healthy selections for a spa lunch.